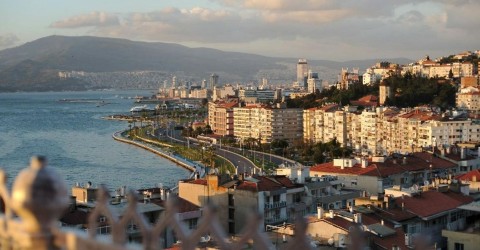 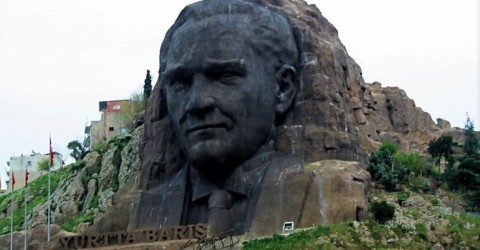 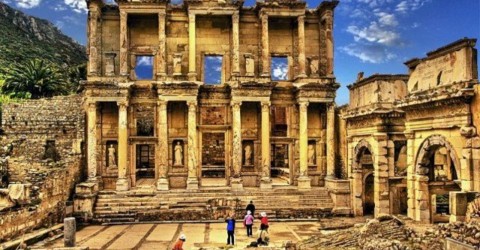 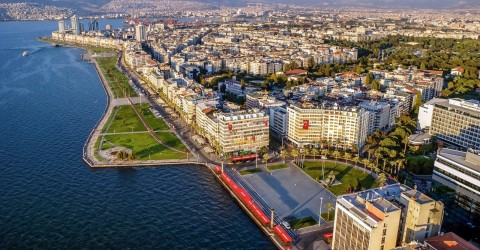 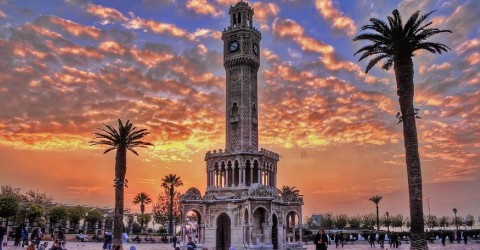 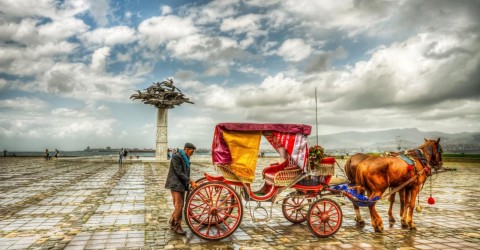 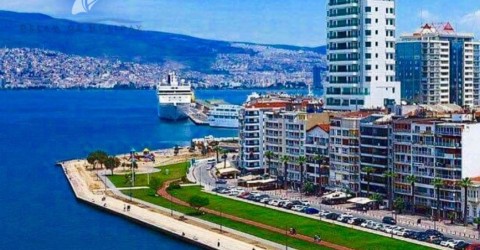 Information About of Izmir, Turkey

Beautiful Izmir, known as the pearl of the Aegean Region, is one of our most beautiful cities. With its contemporary life and the palm trees sprinkled along the coast, İzmir continues to be an attractive city with its shining Izmir nights. 2,850 million in Izmir, Turkey's largest city with a population of 3. It is getting more modernized with its advanced economic and commercial networks. İzmir, which has a cosmopolitan structure, is a city that gives peace with its tolerant, warm and cultured people. Izmir has many functions. As long presence in the Aegean Sea coast, has been one of Turkey's largest port city. İzmir is a city worth seeing, with its fairs, congresses, artistic activities, nightly hot nights and happy people flowing along the Kordon. Izmir, which is a complete trade city, is the holiday destination of thousands of visitors every year with its historical places, geographical location, Izmir Hotels and pensions. In addition, Izmir is also very close to Kusadasi, which is another important touristic town, and the locals prefer Kusadasi Holiday during the summer months. World-famous French writer Victor Hugo said, Izmir is a princess ‘about the city. Izmir is also one of the centers of summer tourism. The Cesme peninsula is a popular tourist destination with its advanced facilities and deep blue sea. In addition, it has resources that provide healing with its thermal springs. We have compiled the most prominent points for you as follows:

We have compiled for you the sights, historical places and natural beauties of Izmir, which is one of the biggest cities of the Aegean Region. You can share the Izmir trip points that you think are missing or your thoughts about Izmir in the comments section.

Antique Age, the largest city in the world, today has attracted the attention of local and foreign tourists has been an important tourism point. The ancient city of Ephesus has been in the war every year because of its location in the history. Hittites, Ionians, Cimmerians, Lydian, Persians, Ancient Greece, Sparta, Alexander the Great, the Roman Empire, Goths and Arab attacks, due to the period of wars have occurred. In addition to being Turkey's biggest open-air museum, it is the most important conservation site. The ancient city of Ephesus, which is one of the most important centers for faith tourism and especially Christian faith, contains works such as the Temple of Artemis, the House of Virgin Mary, the Ashab-ı Kehf which is one of the 7 wonders of the Ancient World and is located in the Seljuk district of İzmir. Turkey is located in the most important tourist centers. In spite of dozens of centuries, the ancient city of Ephesus, which maintains its soundness, was founded by Amazon women fighters. Cappadocia, Nemrut Montain, Troy Antique City, Letoon Ancient City, Hattusha Antique City, Cumalikizik Village, Pamukkale Turkey,Bergama Antique City are some other places in our country which are listed on UNESCO's World Heritage List. Izmir region to be visited necessarily the most important historical sites, are held almost every province in Turkey's Ephesus Tour.

Located in the district of Izmir, the ancient city of Ephesus, Artemis Temple, Sirince Village, our country and the world's most important historical sites in the same region with the Virgin Mary, the most important centers for the Christian world is leading. It is said that the Virgin Mary, after Jesus' crucifixion, did not stay in Jerusalem with the Apostle John after the crucifixion and came to Ephesus and spent the rest of his life there. The place of pilgrimage has been given by the Vatican. Pope VI. In 1967, Paul II. Jean Paul in 1979 and also in recent years Pope XVI. Benedict was conducted at the pilgrimage to visit Turkey. The Church of the Virgin Mary, which is one of the places to see before you die, can be reached by your own vehicle except for the Daily Ephesus Tour.

Şirince Village, which has made its name with 2012 apocalyptic scenarios, has been flooded by visitors from all over the world due to the prophecy of Mayan Calendars. Actors, businessmen and visitors from all over the world in 2012 have invaded Şirince. Şirince village, has recently entered into memory with its reputation spread in language. The village is essentially like a rare painting, which is protected by the enormous natural beauty it contains. When you visit Izmir, you can have a delicious village breakfast in Sirince, you can admire the integration of nature with the famous wooden Sirince Houses. As Hamsikoy, Kayakoy, Golyazi, which are one of the beautiful village of Sirince in Turkey, you can also try the world - famous wines of Sirince. You should put Izmir on the top of your list of places to visit. At the same time, the ancient city of Ephesus, the Temple of Artemis and the Virgin Mary is located in the same area, Sirince will be other alternatives for your trip. As you can reach the region with your own car, you can also join the Daily Ephesus Tour.

When you look at the clock tower, which is the symbol of Konak, which is the most famous square of Izmir, you will feel you are in Izmir. Izmir Clock Tower, which is an architectural work of the Ottoman period, is frequently used among the silhouettes of Izmir with its fine works. Izmir must be on your list of places to see.

Located in Konak district, Alsancak is the most populous district of İzmir with its historical buildings, museums and the world's biggest cruise ships. A beautiful location where you can visit the old churches, historical houses and live Izmir. It is also one of the important centers for the nightlife of Izmir.

It is the meeting point of the people of Izmir and the sea for its people. You will leave yourself to the magnificent Aegean sea atmosphere, the day's fatigue, yachts passing by the sea, watching the ships is a beautiful sightseeing point.

Foça Karakum Beach, which can be one of the alternative sightseeing spots in Izmir. It is one of the natural beauties of Izmir where you can enjoy the sun and have a nice holiday with its clear blue sea and its fine sandy beaches.

A rare destination in the world. Cesme is one of the most attractive tourist spots with its beaches and healthy spring waters. The area, combined with the beautiful Cesme Hotels, pensions and the natural beauties of Cesme, is becoming a perfect holiday destination.

One of Turkey's oldest trade fair in Izmir International Fair, where hundreds of participants from different sectors; is a big fair where developing technology is exhibited. The international fair, which opens every year in September, continues to attract great attention. If you stay in Izmir during your visit to the fair time of the event is definitely a must-see event.

When you visit Izmir, you have the opportunity to visit the historical spots while enjoying the beaches and the sweet sunshine of the beaches. One of the prominent cultural tourism points of the city is the İnkaya Cave. It is a place worth seeing with its length of 222 meters and its attractive texture.

In 1907, it is one of the most visited places of the city. Thanks to the wooden balcony at the top, a magnificent view of Izmir is laid under your feet. Gundogdu Square: one of the most famous squares of Izmir. You can relax with a sea scent like a misfortune.

So to speak, it is a tremendous place where the sea is clean and its bottom is visible. It is a brilliant holiday destination, waiting to be explored with its chic restaurants and popular cafes where delicious food is cooked along the coast. Izmir Cesme may be a nice option for your Izmir holidays.

It is an architectural artifact on which you can breathe the spirit of time with its 8500 years history. The ancient city in the town of Bergama continues to be one of the historical places of Izmir, where its guests have shown great interest throughout the year. The ancient city of Pergamon (the ancient city of Pergamon), which hosts various civilizations, is an eye-catcher with its enormous historical past. In the area where dozens of architectural works are exhibited, you will feel like you are strolling through the pages of Izmir's history. The ancient city, which is visited frequently by local and foreign tourists, is one of the historical points of İzmir. A must-see historical place in Izmir. It is also among the World Cultural Heritage by Unesco.

İzmir Alaçatı, one of the most popular holiday resorts of Cesme, has become one of the rising values ​​of İzmir. Increasing the number of visitors each passing period, the region has become a favorite of windsurfing enthusiasts recently. Cesme Alacati, one of the most preferred tourist resorts of Turkish holidaymakers, is one of the ideal holiday stops. Alacati Hotels, hostels and many tourists in the last years with many local tourists.

Agora, where quite a lot of artifacts were exhibited, became the heart of social life in the 4th century BC. Agora, which stands out with its basilicas, is a cultural tourism center worth visiting.

The historical monument built in the region where Amazon female fighters have power has survived to the present day. Because it is located on the beach, it creates a panoramic view. If you want to see an unusual castle, we strongly recommend you to visit.

It is the paradise corner of İzmir, which will be able to caress your soul with its fascinating nature, where you can see about 220 bird species. Thanks to the bird observation towers, you can easily scan the area. You can also cycle through the entire area using the bike. You can get to your travel guide.

The Temple of Separis, Izmir Turkey

It is one of the historical places of Izmir where local and foreign tourists are interested in every period of the year with the feature of being the highest brick structure of the Roman civilization. The temple mentioned in the Bible is an important center for faith tourism.

The region which has healing resources, contains many historical and cultural places. You can get health from both thermals and you can visit the city's favorite points. You can opt for health tourism.

Turkey’s one of the most popular resorts of Izmir  will offer a combination of too many alternatives for your holiday with alternative accommodation options such as Izmir Hotels and pensions etc. Izmir Hotels that you can find suitable for your budget are at a level to enter easily among the classy hotels of the world. Our company Dream Of Holiday, which is one of the pioneers of the rental holiday villas and vacation rentals sector in the villa, serves every budget and every guest group in hotel concept in Izmir as well as in holiday centers such as Bodrum Turkey, Marmaris Turkey, Kusadasi, Fethiye Turkey and Cesme. You can reach our rental houses and holiday homes in different locations and concepts in Izmir from the relevant links.

It is in a convenient location in terms of transportation. except road transport, which is one of Turkey's largest port Izmir over the harbor, sea and can be reached by air. Istanbul Turkey, Ankara Turkey, Bursa Turkey, Antalya Turkey, such as metropolitan cities, Izmir is a regular bus service to the province. You can use Adnan Menderes Airport for your transportation to Izmir. You can get detailed information from our other company, Arsis Vip Transfer, for your transfer to Adnan Menderes Airport to Izmir. As one of the leading companies in the Yacht charter sector, we will offer the Gulet Charter and Motoryachts rental service we offer at Gocek Port, Bodrum Port, Fethiye Port, Marmaris Port and Kalkan Ports as soon as possible. For more information, please contact our call center.